First of all, I hope that you all had a great holiday week! I can’t believe that tomorrow it will officially be 2019. This last year went by so fast, and it was stressful and busy, but definitely a good year. I know that 2019 will be even better. We have so much happening in 2019, and hopefully the entire interior of the house will be completed.

Speaking of house, there was some major basement progress happening over the Christmas break. David worked long and hard building our built ins. They are probably 95% completed, we need some hardware for the cabinets, and to decorate and fill the shelves. We rarely went to sleep before 12:30 because we were so busy taking apart the basement, going through all of the toys and junk we have yet to go through since we have moved, and then organizing it all into our new storage systems.

After all of the work we put into it, we are so happy with how it turned out. The kids weren’t able to play in the basement for a few days, so the looks on their faces when we revealed their newly organized space was priceless. Hopefully it stays this way!

Next up on the basement agenda is painting the entire room, new floors in the bar area and workout area, and redoing the bar. Go figure, a much larger project then we anticipated. 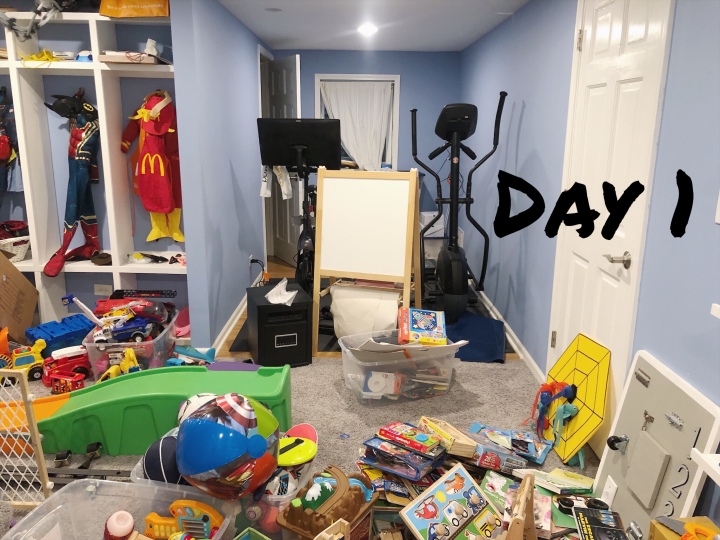 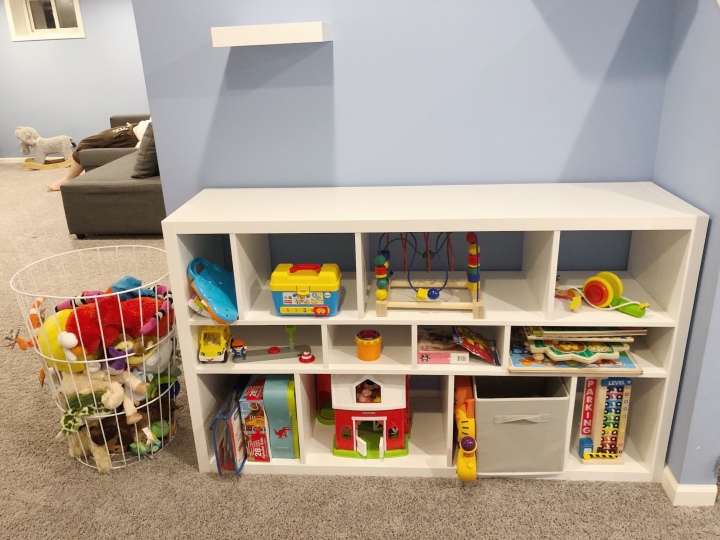 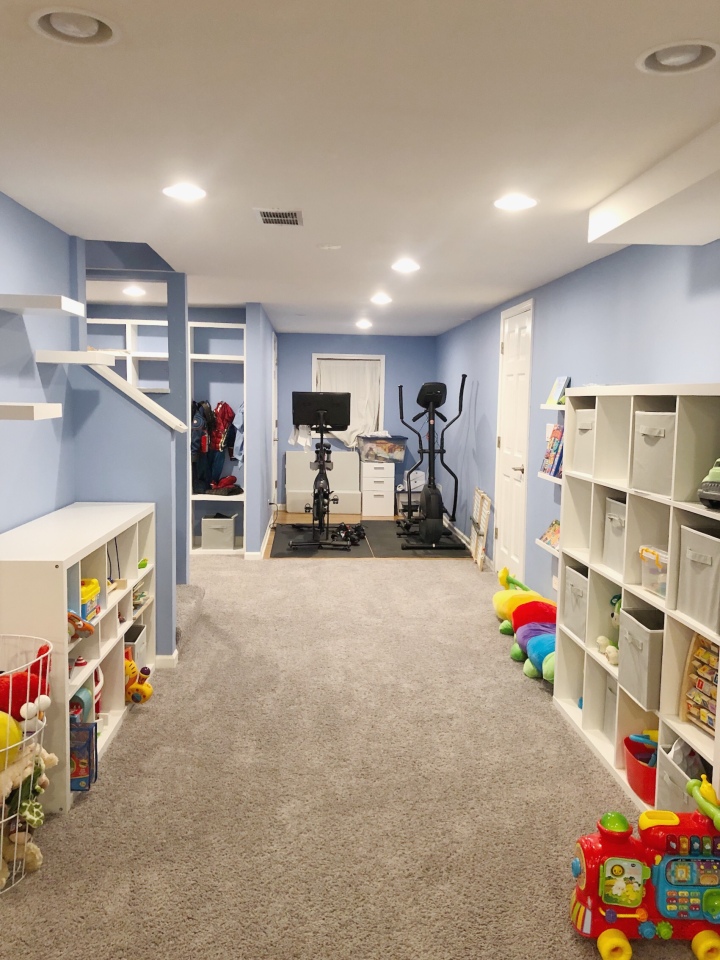 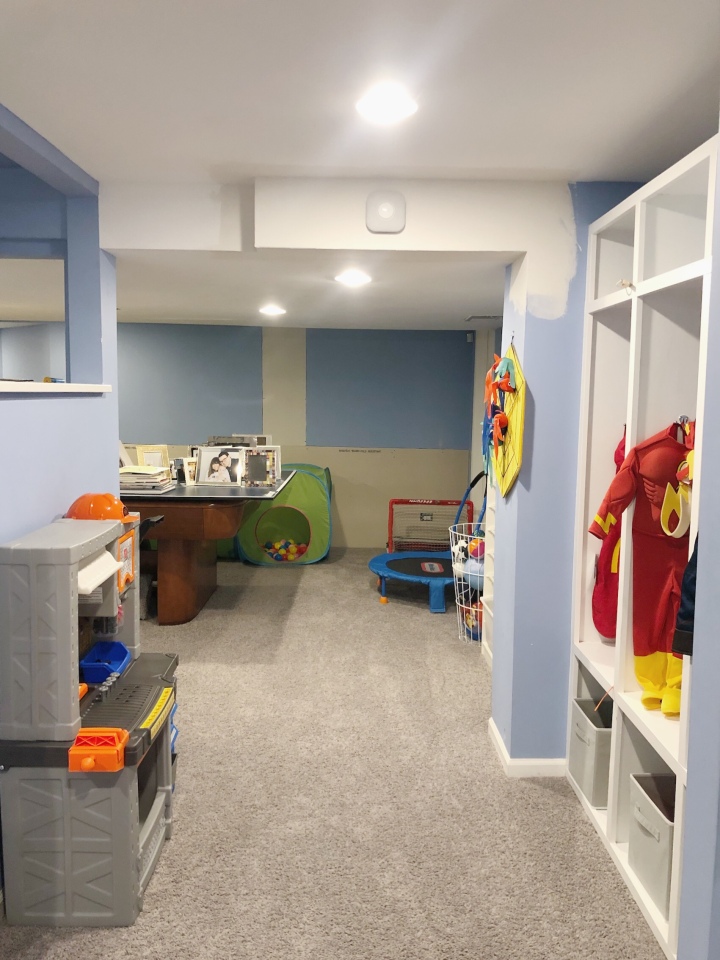 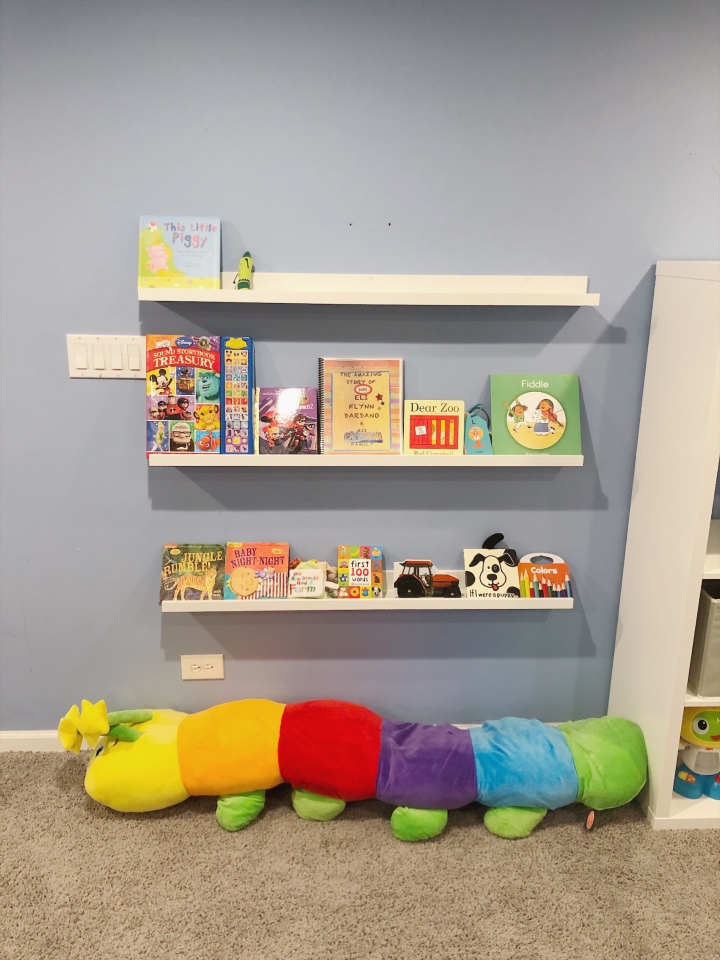 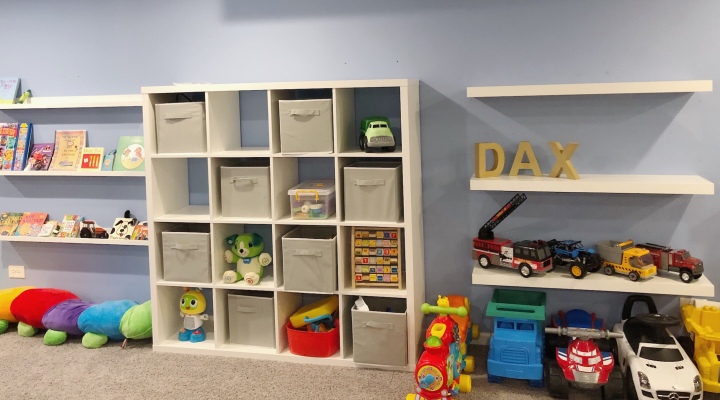 If you read my last post, I’m sure the suspense has been killing you. Haha ok maybe not. Anyway, if you didn’t read the post; I’ll sum it up for you. We have too much trash and other crap in our garage. So much that we look like creepy hoarders and need a dumpster to help load it all. It started off being somewhat tolerable, but I finally am at my wit’s end with it.

Now that we recapped on that…

David was getting the stroller out of the garage before Eli’s golf class, and when he went to close it, it broke. Big time.

David went to check on what the problem was, and it looked like the roller came off the track. Seemed like an easy fix, but of course we underestimated the problem.

We had to leave for golf, with the garage wide opened, and our embarrassing hoard like mess.

I went onto Thumbtack and found a guy to come fix it ASAP.  He charged a small fee to come out, and that went towards any materials. We had about 3.5 hours until he was going to come out to fix it, so David had to clean the garage out in that short time period in order to make space for the repair guy. He cleared a lot out before the repair guy arrived, and it looked 10x better than earlier that morning.

The verdict on te garage was that the system was completely broken.  He also told us that it looked like the garage was previously repaired, and they did the repairs incorrectly.  Doesnt surprise me at all to be honest. So after $500.00, we have a semi clean garage, and a brand new garage system that we could connect to our wi-fi.  It is pretty cool, but what would be even cooler, is new garage doors.  Our doors are so cheap looking and old, but until we do the exterior of the house, it just doesn’t make sense to repair them.  Next year!

Here is a little bit of what David accomplished in 3.5 hours.

Well, this weekend had some unexpected events with the house. It’s always something.

This post is embarrassing to write, but here it goes. As you already know by now, David is a little bad at estimating how long any project will take. He thought certain rooms would be done months ago, so he was proactive and we purchased all of the materials and supplies months ago. It’s great to think ahead, but it’s not so great to fill our garage with boxes of stuff such as tools, cabinets, shelving, dry wall, more cabinets, more shelving, more boxes. You get the point.

All of this stuff has literally taken up the majority of the garage. It’s all piled in the middle. To the right of this massive pile is all of the boxes from our move that we still have yet to unpack. What should be a walkway on the other side has become our personal landfill.

This landfill in our garage is the most disturbing thing I’ve seen, it looks like a scene from hoarders I’m not even kidding. It is a safety hazard and probably so unsanitary I can’t even explain. Obviously I try not to set foot in there, or allow the kids near there.

Obviously on trash day David takes as much as humanly possible out to the bins, we even signed up for a second trash day, but it still isn’t enough and we just can’t keep up.

Last week I was at my wits end with this situation. I had to load both kids into the car in the pouring rain, I needed something out of the deep freezer that I couldn’t get to. I started researching companies to just send a dumpster to get rid of all of the trash and be done with it so that I could park the car in the garage, and get to the deep freezer. The quotes I saw were astronomical, but so worth it. David disagreed though. He said he had a plan and the trash will be gone soon. Right.

Fortunately for me, I kind of sort of won this battle. We had a little incident with the garage this weekend that made David have to pause on the rest of his 27364848 projects. I’ll get to that in part two, but until then…enjoy this hot mess we have been hiding behind our garage doors. And just so you are aware, this is after David did some major cleaning in it and took out all of the cabinets and boxes. I just couldn’t possibly take a picture of what it looked like before.

Oh, and please no judging!! 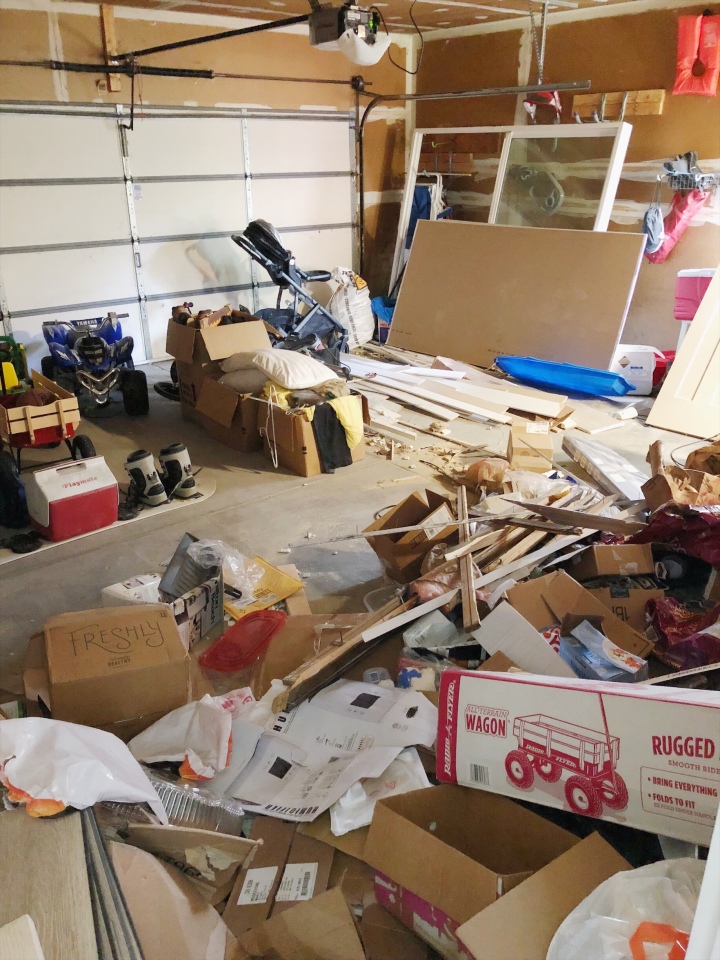 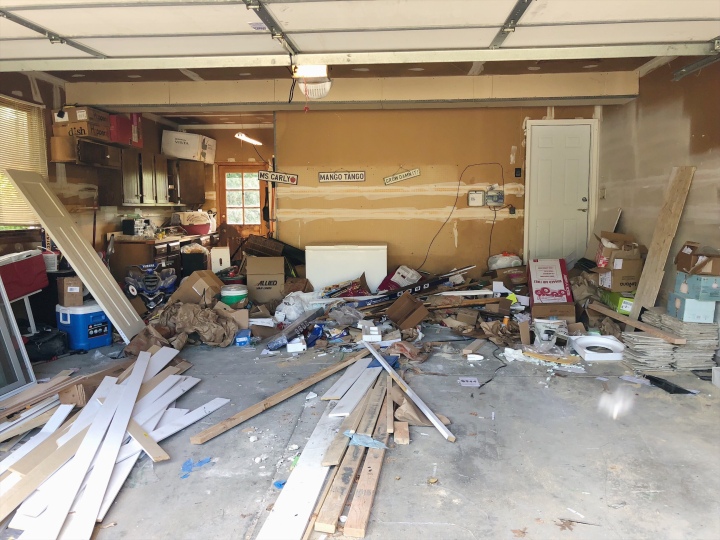 While there are still so many big things to do in this house, there are also a lot of small things.  To start, there are zero pictures up anywhere.  I know that sounds like such a dumb thing, but to me, pictures make a house a home.  We also have spent thousands in photographers, so you bet your bottom I will have those pictures displayed!!

The next thing that bothers me, and it is so petty, but there is no place to put our shoes.  We have a pretty small foyer and entry way, so when we put 4 pairs of shoes at the door, it becomes messy and cluttered. Not to mention, one of us is always tripping over them.  In normal homes, people would put their shoes in their mud rooms or whatever room is off of their garage.

We can’t use our garage at the moment, so we decided to clear the mud room by going through this hot mess, and re boxing and organizing everything.  This really kills two birds with one stone because it gave us the opportunity to find all of our decor and pictures to put up around the house, and it also gives us a pretty empty mud room to place our shoes in so nobody gets hurt.

Now that the mud room is cleaned out, I think I know what I want our next major project to be… 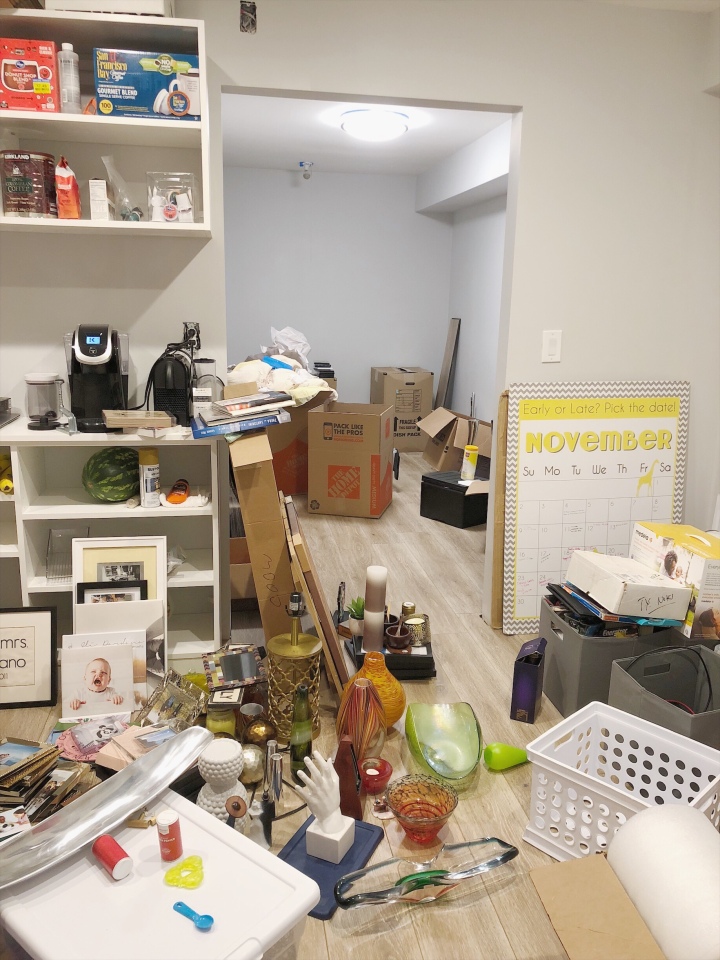 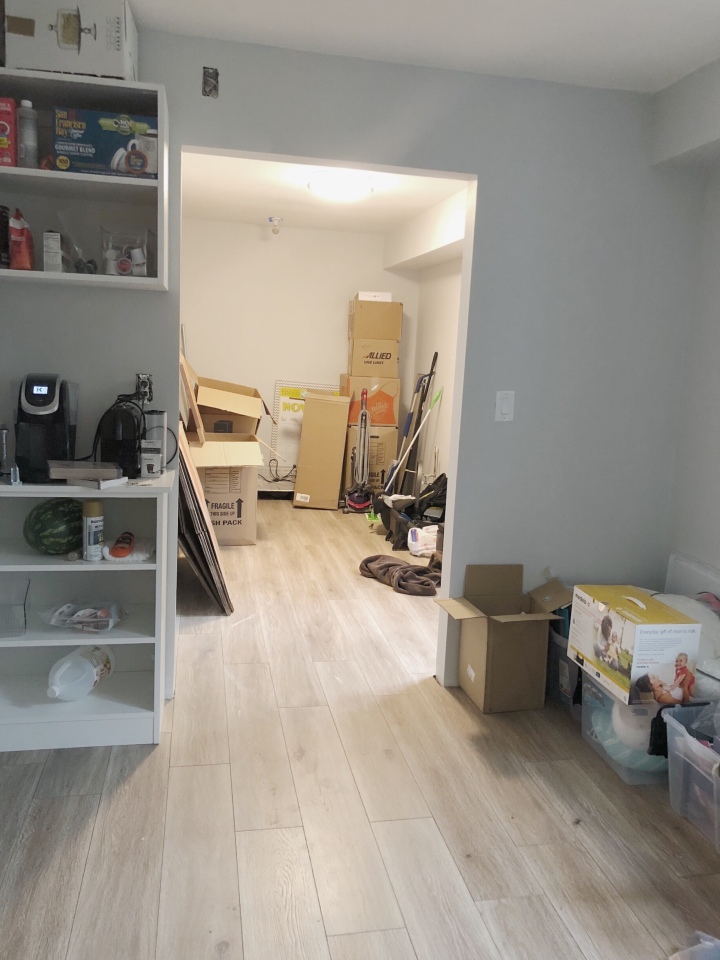 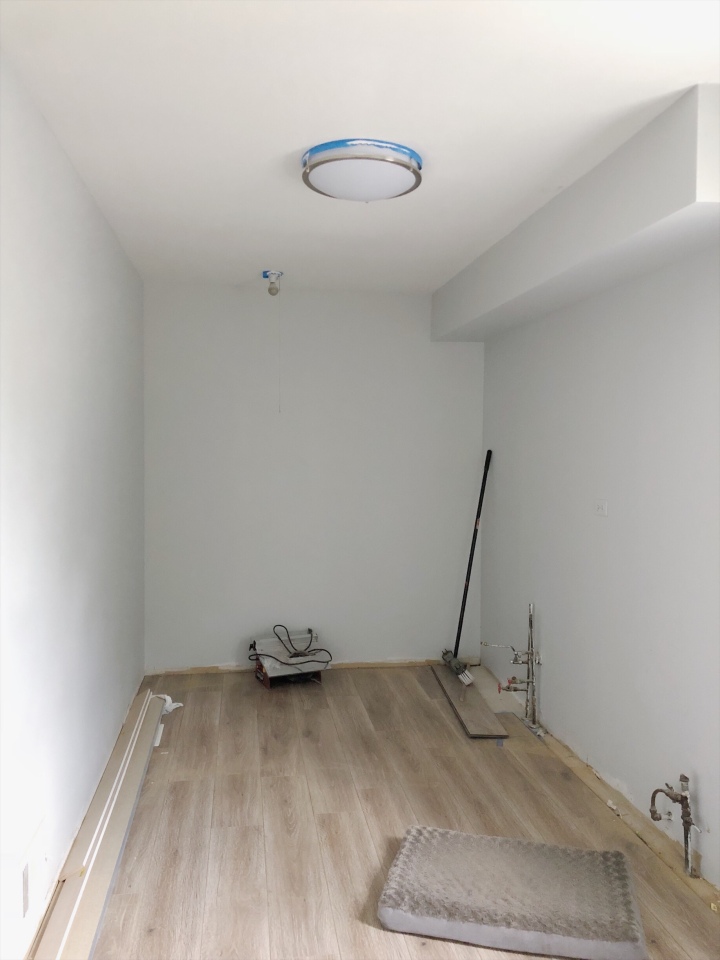 Not sure how much we will get done with Father’s Day this weekend, but knowing David, he will want to work on something. Have a great Father’s Day weekend!

Our pantry was built a couple of months ago. We loaded the shelves but we never actually organized them. It was starting to become really chaotic- especially for Eli. He couldn’t find anything and then would put things back wherever he felt like it.

If I had my perfect pantry- everything would be in bins. Everything. There would be no boxes, no bags. It would look so clean and perfect. Unfortunately, spending $1000+ on bins just isn’t in our budget at the moment. Instead, we purchased a few just for items that often are out of place. It is hard to tell which items are in bins because they are clear, but it looks great.

The shelves are looking 10x better and they are already so much easier to navigate. Hopefully we can keep the cleanliness up. There’s still a ton to do in here. We need to finish painting, moldings and trim, switch out the lights, and go to Costco to buy even more to fill those naked shelves. If we get enough done this summer- maybe we can start on the second part of the pantry- the planning center! We are currently using our basement and kitchen island to store junk so the planning center will come in handy.

We have family coming in next week to celebrate Dax’s first birthday, which also happens to be our one year anniversary in this house. Time sure does fly. I’m hoping there is lots of progress during this long weekend, but I most likely won’t be able to share it for a little while, I’ll try though!!

Have a great weekend! 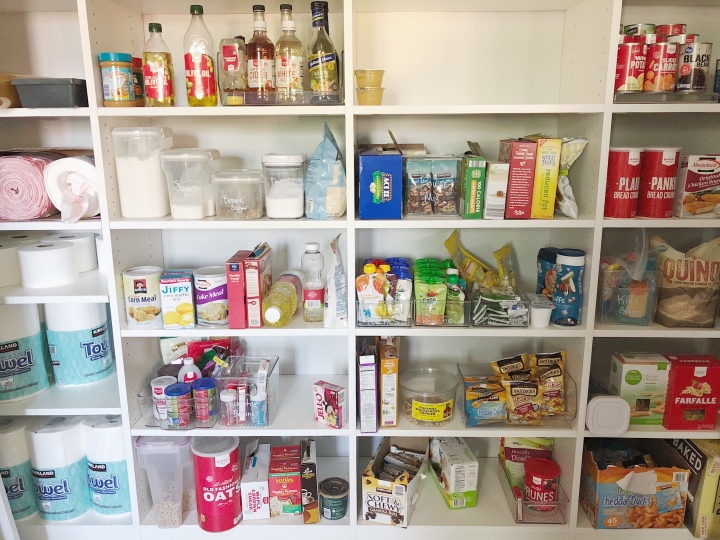 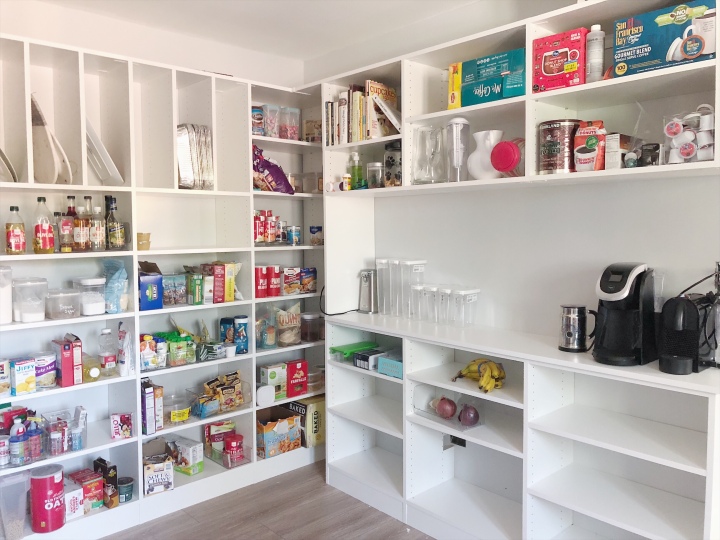