Oh hey there! Remember me? Sorry I’ve been MIA. So much going on here I really can’t explain it. But what I will explain is how much progress has been made. So so much! This place is finally looking like there is an end in site but today, I’ll focus on the fireplace. I already mentioned it a while back (feels like decades ago).

Let me back track a little though. The painters started yesterday. We scheduled it two weeks ago so it’s not like it was a shock and last minute that they were coming this week. The problem was that David made other projects his priority and so all of the things that had to be done for the painters weren’t. To say it was an extremely busy weekend is an understatement. David was up until about 2 am Sunday night trying to get everything ready for the painters. He had to install all of the trim, the doors, the fireplace, and all of the moldings. Most of this got done but more on that in another post. This is about the fireplace- man I get sidetracked.

He shiplapped the entire fireplace and even though I originally wanted tile, now I’m in love with it! One decision we were contemplating was if we should put crown on the top or not, but we decided to do a small trim instead of a thick molding and I think it turned out great! The painters painted it today and it looks gorgeous. So so impressed. Also, not going to lie, David is soooo obsessed with his work. Ok, maybe proud is the better word choice. But either way it’s a great accomplishment and we are in love with it. I guess the only sucky part is we don’t get an actual “fireplace insert” until next year. Oh well, we can just look at it for now! 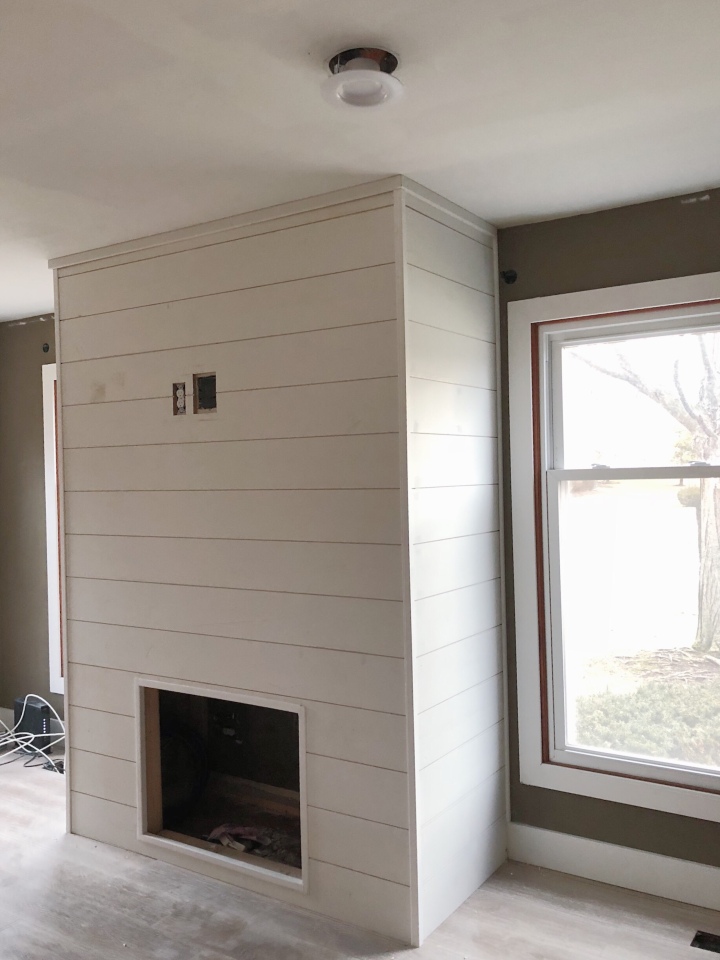 Hopefully you all had great weekends.  I have been fighting off another sickness. I swear it’s never ending.  The weather was also kind of gloomy and really cold, so that meant we had to stay inside and work on the house.  By we, I mean David (Eli helped too).

Kitchen: We decided that we want different pendants.  The ones we were eyeing became available again, so we ordered them! Hopefully we like them more.  Here are the current ones we are switching out.

Fireplace: The fireplace is almost done being framed.  David built it so that it could withstand a lot of weight.  AKA a giant TV.

Doors: We are replacing all of the doors in the house.  The contractor is charging us more money to install the doors, than the doors actually cost, so David is installing them himself.  He installed the half bathroom door and the basement door.  Maybe now that the basement has a door, the dog can’t run in there to take a pee.  Oh wait, he went twice today.

Master closet: Our clothes are still all over this freaking house, which makes it hard to keep the house clean and organized.  I still can’t find the majority of my winter stuff.  Anyway, the shelving and priming got done in our master closet.  Which means it needs painting and then we can officially move into our room.

I talked to our contractor today and he mentioned they would be done this week.  Thats great, but there is still so much more for David to do! I just hope that we are 100% done by June. That seems really far from now right?

I was going to save this post until there was a little bit more progress, but this cold weather made me want to post it a little sooner! Also- progress is going really really slow right now. I’m hoping the contractors are done by next week but who the heck knows!!!!

One thing that I asolutely have to have is a fireplace. We have had a gas fireplace in every house and we used it pretty much October to March, sometimes even April.  Totally worth it to have one, and now that we are in the Midwest it would get even more use.  Fireplaces aren’t cheap, especially since we are building one from scratch and will have to add a gas line and such.  We decided to temporarily frame it out, and wait to get the actual fireplace until next year. This is another project David is doing- the framing part, not installing an actual fireplace. We had different visions for this room, and so far David’s vision is winning. Even though it’s not what I originally wanted, it’s still going to look great.

Have a great weekend and keep your fingers crossed for more progress next week!