…..Kidding! But really, if we want to we totally could now.

I had family in town visiting this past weekend, so while we were all lounging in the family room and kitchen, David put up some of our window treatments! I think I got so used to not having anything covering the windows, that the lack of privacy didn’t even phase me.  Now that the shades are up, I realize how amazing it is to have that privacy.  Not to mention, the sun is finally out again and without shades, our downstairs was getting really hot, and it is so sunny to the point where I sometimes cook in sunglasses.

We had plantation shutters in Compass Pointe, but since this is most likely not a forever home, it didn’t make sense to put those in here.  Instead, we went with beautiful, light, and soft roman shades.  I love the look and they are really easy to maintain.  They really complete the look of a room, even though we all know the rooms aren’t completed.

It feels so great to finally be able to check some stuff off of our never ending punch list.  I actually have a couple of more progress updates this week, and maybe just maybe our walk in closet will be finished.  Stay tuned! 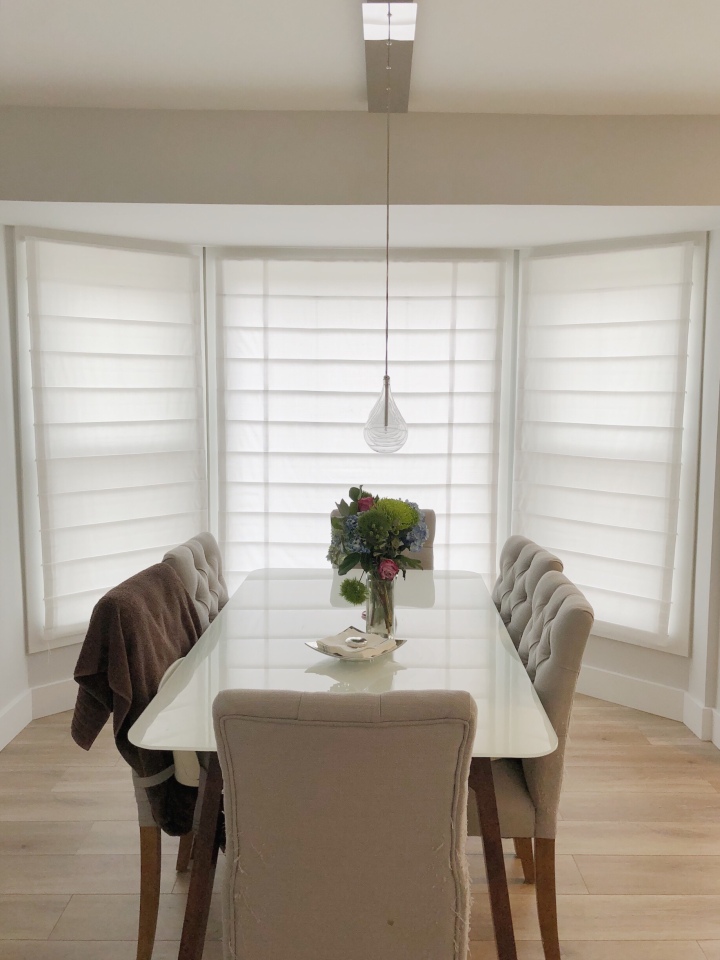 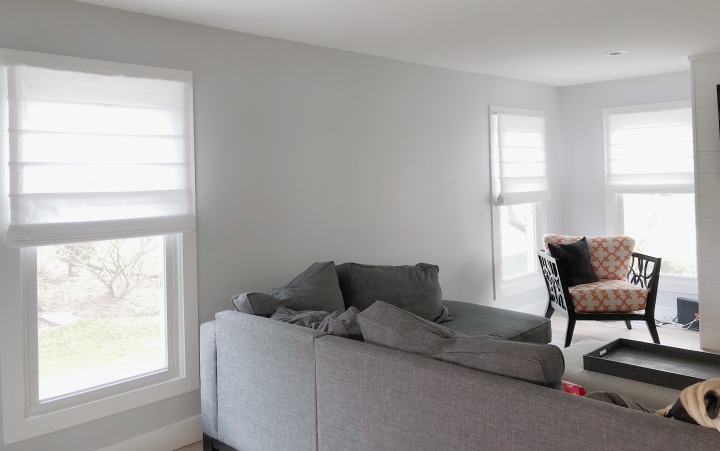 I know I promised for some updates, but I have been so unbelievably sick.  So sick that David had to take off work, and he even slept in the basement all week. Poor guy.  Anyway, because our room was quarantined, he couldn’t finish my closet like he swore he would this week. He also was on daddy duty all week so he was too exhausted (I assume) to do any other projects in the house.  It’s always something.  I don’t care how sick I am this weekend, the closet is going to be finished. Period.  I also really don’t know what project should come next, so let the stress continue.

Have a  great weekend!

I swear I’m not neglecting this blog, but we just got back from a much needed vacation. Since we were gone there wasn’t much progress going on, but I swear our closet will be completed by next week. Well, it better be!!

If I had a choice, the closet will be completed, and next up our kitchen, pantry, Eli’s big boy room, laundry room, family room, office/playroom, mudroom, and then the exterior. But let’s be real, it totally won’t go that way.

Anyway, be on the lookout for a closet update- hopefully it isn’t two months from now (kidding!). In the mean time, look at these little cuties in vacay mode…

Happy New Year! I am so happy to leave 2017 behind.  It was such an eventful year.  From being pregnant and living in MN alone while David lived here in Chicago, to driving and moving to Chicago at 35 weeks pregnant. Going into labor almost 2 weeks early…on the day we had to close on our new house.  Finding out I needed surgery, getting inconclusive results, being told I might need another surgery and possibly might have something scary going on- just to be told false alarm! Starting a complete renovation on our new house, and the list goes on! This picture is from last New Years when we decided to announce we were pregnant again.  Eli had zero idea what was going on since he was newly two, but I love to look at this and look at how much he has changed since then. Anyway, all I want is to be happy, healthy, and settled this year, not too much to hope for right?! 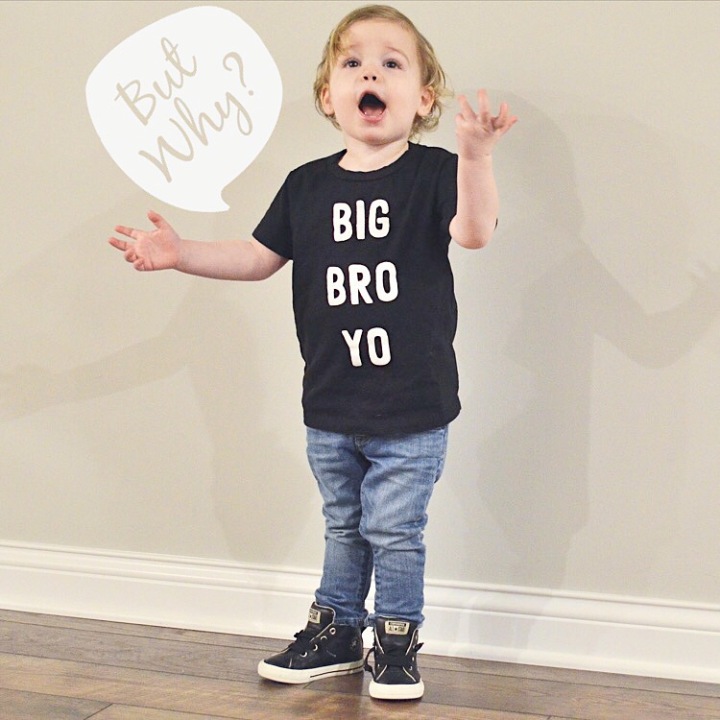 I hope you all had a very Merry Christmas if you celebrate.  We don’t celebrate Christmas, but I still love it! We had our usual Chinese food on Christmas Eve, Eli left cookies for Santa, and we went to see some amazing Christmas lights.  So nice!

We now have the door that closes off the new kitchen from the old kitchen (which will be becoming our pantry).  It looks great, and I am so excited to have so much space, but David and I made a little booboo with the planning of this door.

We thought we would buy a new table and light once the kitchen was complete. We were redoing everything, so why not get new furniture right? We had the measurements of the table, and knew the shape of the light, so we told the contractor and they did rough ins for where the light would go, which was based off of where the table was going.  What we didn’t do, was take into consideration where the door to get into our pantry would go, and how big the door would be.  The wall has been up for a while, so we knew exactly how wide the doorway was, but because there was no door, I think we kind of forgot that there eventually would be one, and that area would be used as a walkway into the pantry.  Oops.

Now that the door is there, and our light arrived last week, we realized that our vision wasn’t really possible anymore.  We have no idea where the table will go, and the electrical work our contractor did is kind of irrelevant.  Fortunately, we didn’t purchase the table yet, so we possibly could go with a different shape, but we shall see. 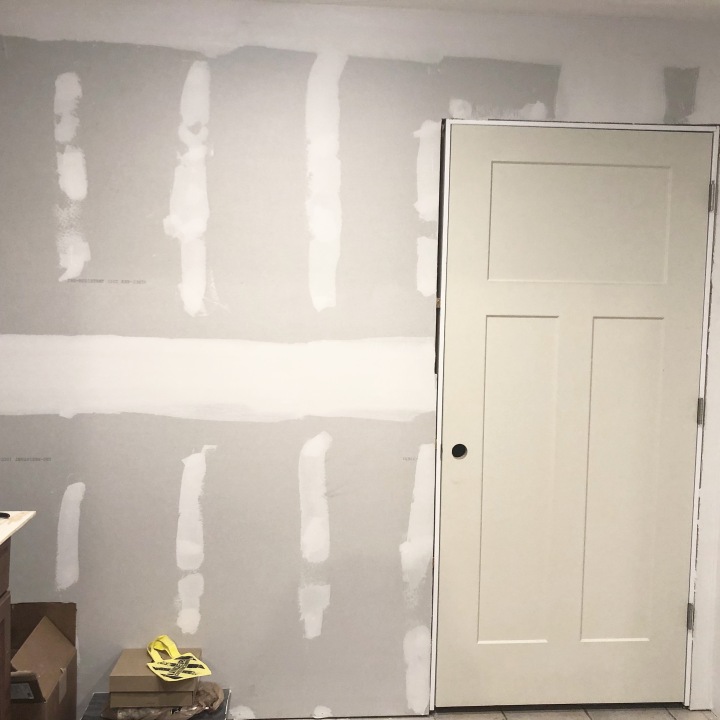 Since we have had some family members here since last week, I haven’t been able to write much about the house.  But don’t worry lot’s of updates coming soon.

I just have to take a second to say Happy Birthday, Eli! I can’t believe I have a 3 year old, it really goes by so fast.  So much has happened in the past 3 years.  We are officially hitting the threenager stage and it is pretty yucky, but we love him anyways.  We had SO much fun at his birthday party over the weekend and can’t wait to celebrate him all day! 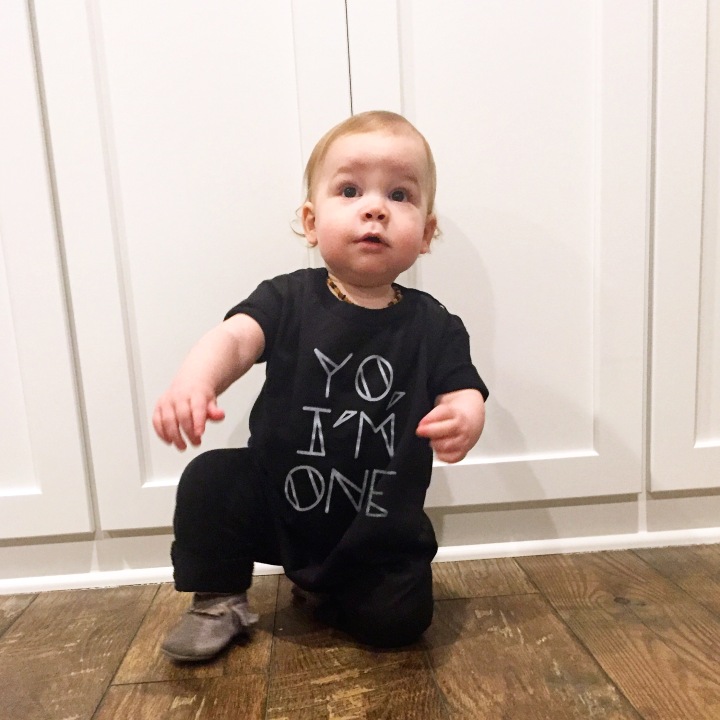 For those who already know us, you might be laughing at the title of our first post/ and the name of our blog.  If you don’t know us or our situation, I will give an introduction to our life and why we decided to create this blog. This post is going to be a long one, but I promise the rest will be shorter and contain more pictures!

To start, I’m Carly and my husband David and I just purchased our fourth home in Illinois.  We have moved 8 times and have lived in 4 states since we got engaged in 2010. David has been fortunate enough to get promoted quite a bit, but after 10 years with the same company, he decided to pursue a new career opportunity.  If that doesn’t sound crazy yet, we also had two babies along the way.  Our most recent baby decided to come early on the morning we had to close on our new house. Timing has never ever been on our side, but that is an entirely different blog itself.

3 of our 4 homes that we have owned have been new builds.  We built and designed our first home (let’s call that Scoria Lane), our second home (let’s call this one Owl Lane) was brand new but we bought it too late in the process to choose our own finishes, and our third home(Compass Pointe) we designed and got to pick and edit our floor plan.  Our friends and family always laugh and joke at us because we are known to build new homes but change them after we move in. In David’s terms we are “New Build Home Flippers”.

Let’s backtrack a little.  We moved into Owl Lane October 31, 2014, had our first son on November 21, David was promoted December 25, and we moved to Minnesota on February 19th to a hotel for a week, and then temporary housing.  After 4 months in less than ideal temp housing, we closed on Compass Pointe in June of 2015 and in July 2016, David decided it was time to leave his job which was the reason that we were in MN in the first place! He had a great job opportunity in Chicago that was honestly impossible to pass up.  The kicker to this change, is two days after he accepted the job, we found out I was pregnant again. We didn’t want to sell Compass Pointe right incase David hated the job, also it wasn’t a good time to sell in our neighborhood, so for 6 months I was pregnant and raising a crazy monster of a toddler in MN, while David lived, worked, and house hunted in Chicago alone, all while commuting  back and forth on the weekends.

This brings us to today!  We moved here May 3 and lived in an amazing temporary apartment until we were set to close on  June 1.  I think we had this vision that David and I  would be at the closing together, and have a smooth moving process.  We would unpack everything before the baby arrived, have his nursery done, the house cleaned… you get the point.  However, things never go according to plan, so we had to sort of wing it along the way.  I mean I wouldn’t really define “going into labor the morning of closing, having nobody to watch the toddler, and having to move 24 hours after the baby arrived” as going according to plan, would you?

When we purchased this house (or should I say when David purchased the house, since I never saw it before we put an offer on it), it looked very clean and well-kept. Shortly after we closed, we realized that maybe the house wasn’t in as good of shape as we anticipated.  Could it have been in worse shape? Of course, but there were a ton of things that needed to be done quickly in order to make it safe for the kids and as stress free as possible for my postpartum recovery.  For the first month or so, little but expensive things would pop up.  I mean, who knew you had to get your air ducts cleaned every year? Not us, maybe because we haven’t lived anywhere long enough to know that! Both David and I agreed that this house needed a full renovation, and fast, which leads us to why we started this blog! At first we thought just a kitchen reno and master bath, but it has turned into much more.

After 3 months of interviewing contractors and architects, we will finally be starting construction this week! I can’t even explain my excitement into words, also the fear.  Construction with an almost 4 month old and toddler who both nap…yikes!!  Most of the renovation will be hired out, but David will also be doing a lot of the work for easier jobs that don’t need to be done right this second. We are so used to just adding on and building character to our new build homes, that this is going to be a much more drastic process for us.  We have always been asked for updates on projects for our last three homes, and we figured this one would probably be the most exciting yet for you all to see. Although we are doing some major changes e.g. moving the kitchen to a different part of the house, we still want to be mindful about the changes we do incase we decide to sell one day. Once we really get to know the “village” we live in and have a better idea where we want to live, we have talked about building a custom home in 5 years as a true forever home but let’s be real…I have a feeling David will get the construction bug again and again, and again.  That, my friends, is why this blog name is so fitting.  Just like with kids, we keep saying that “this will be our last house”, but really, what is just one more, right?

Thanks for stopping by!!