A couple of weeks ago, we finally tied up most of the loose ends and Eli’s room is 99.99% complete! Even though his room is tiny, it is so adorable and we are all so proud of it. Eli loves it so much that whenever he has a friend come over for a playdate, the first thing he wants to do is show it off.

I got my inspiration from Pinterest,  but there were a few things that I wanted for this big boy room.  First and foremost, I wanted the room to be a room that could grow with Eli.  As much as I love decorating, I don’t want to redo his room every 3 years as his interests change.  So we went with more of a color scheme rather than a “theme”.  It was really important to me to use a lot of the furniture and accessories from Eli’s nursery without it looking too babyish.  We worked really hard on both of his nurseries on Owl Lane and Compass Pointe, and we were really fortunate to get some of his furniture made and gifted by family members, so it is extra special.  Lastly,  I knew that I wanted him to have a bed that he could grow in to, unlike a toddler bed, so we went with a full-sized bed and a more mature headboard that he (hopefully) won’t get tired of.

David did some great modern looking moldings, similar to Dax’s room (almost complete BTW) and our stairway.  I wanted to give the room something special, so we went with this amazing wallpaper.  From the moment I came across it on Pinterest, I was instantly obsessed.  I think it looks amazing on this wall, even though it took us a while to figure out which wall we wanted it to go on!  His bed looks fabulous against it in my opinion.  I am super into mixing patterns, and we found his comforter at IKEA of all places.  I am loving the blue and green combo. We purchased a cute decorative pillow, but with the amount of stuffed animals Eli loves having in his bed, it just looked to cluttered, so we returned it.  I am still on the hunt for a blanket or quilt, but I think for now the bed looks fine without one.

We weren’t going to use this bookshelf that was in Eli’s nursery, and we purchased a new one, but as we were setting the room up and noticing how many books our book-worm has, we decided to use the bookshelf from his nursery.  It actually looks great in the room, and holds the tons and tons of books he has. We decorated it with my favorite bookends, the invitation from his baby shower , and some other cute accessories from Target (duh). 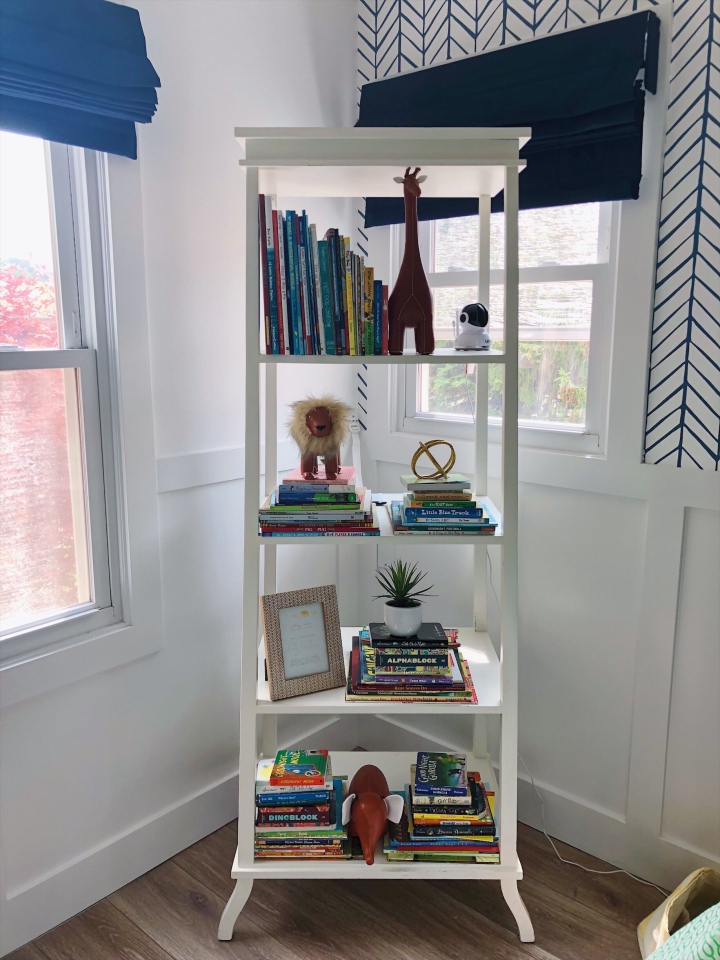 Besides the wallpaper, one of my favorite parts of this room is the dresser.  My uncle built it for us and my grandparents bought it for us.  It is gorgeous, the best size, and we will never get tired of it.  When Eli was a baby, my uncle had built a changing table topper for the dresser, so the room officially felt like a “big boy” room when we took the topper off. Sad!  We replaced the topper with some photos, some special books that were my mom and dad’s from when they were children, and a boat that my Zayde (that’s yiddish for grandfather) made Eli before he passed away in January.   Eli is in a monster phase right now, so we obviously have a nightlight on there too to keep the monster’s away- except for Dax, he’s here to stay. 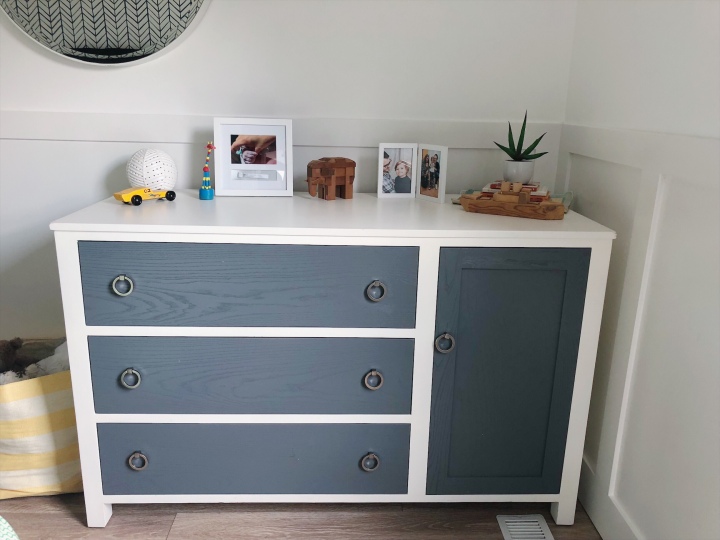 I spent hours looking for artwork for this room, hours.  After wasting way too much time, we actually opted out of artwork because the room is so freaking small.  Having a ton of stuff on the wall just would make it look way too cluttered.  Instead, we put these amazing signs that were made for him from my Bubbie (yiddish from grandmother), and my dad.  I think it looks great.

One of my least favorite parts of the room is the roman shades.  I love the look of the navy, but I hate that they are cordless.  We chose this for obvious safety reasons, but they are the most annoying shades to deal with, in fact I leave them down 100% of the time because of the hassle.  You can see in these photos that they are both up and uneven.  Yes, this is because I was struggling for 30 minutes on how to get them both up all of the way. So embarrassing! We didn’t want to do custom shades in this home, but we won’t be purchasing these ever again that’s for sure.  Oh, and sidenote, ignore the awful screens on our windows, they all need to be replaced hah!

The only things left to do in this room is get some hardware for the closet doors, and David needs to scrape off some of the paint on the floors.  I also need to unpack and find the photo of me and my mom that was up in Eli’s nursery to put up in his new room. Eli is named after her and I love that her picture is overlooking him when he sleeps.

I can’t believe what a transformation this has been, and how long it took, but it was all totally worth it! You can see the before photos here.